Two weeks ago Tom built what is called a "whelping box" for our Naya girl who seemed that she would burst at a moment's notice. Riley went out to the barn to say goodnight to her before he went off to bed. 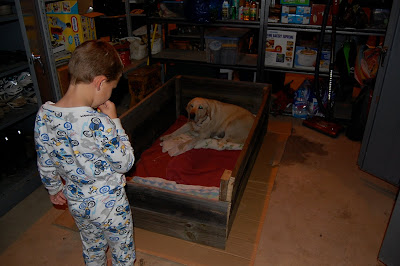 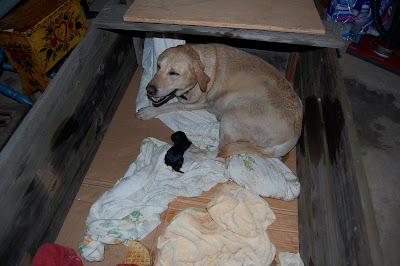 On Abram's birthday, at 9:30 am, Tom went out into the barn and this is what he found. One little, teeny-weeny black pup. Naya was in labor and we set aside all birthday plans to stay home to help Naya if she needed it. 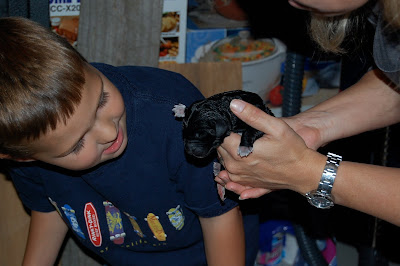 Turns out, she pushed out a new puppy about every 30 minutes until she stopped around 1pm with a total of 6 little soft and cuddly black puppies. 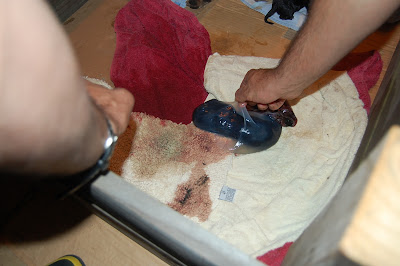 One little helpless pup was born in its sack. I quickly called Tom over who broke it open and we stimulated it with warm towels until it started to breathe and then we placed it on Naya's chest. (Interesting note: Mama dogs typically break the sack upon birth and quickly eat it up along with the umbilical cord and any "birth juices".) 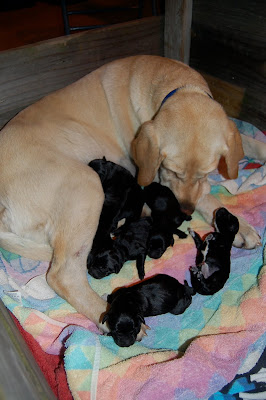 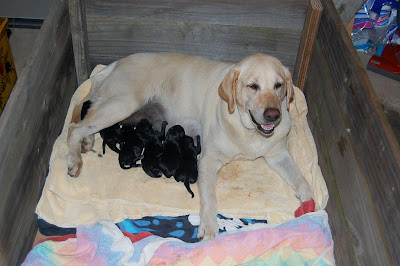 Later that evening, after we had already determined that she was done having pups (It had been 9 hours since the last one as born), we let Naya outside to go potty. It was raining and pouring outside and under our metal roof, you really can't hear a thing. Naya usually comes right back within a few minutes but this night she didn't return after Tom waited for her for about 10 minutes. He got his rain gear on and put his head lamp on and went outside. He came back inside after a while with two wet, cold puppies in his hands. It looks like Naya thought she had to go potty when really she had two more puppies to birth!
So, there were 8 total.
Naya is such a good mama-girl. She loves her pups, nurses them all day, and licks them clean so they shine like the sun.
Now...since this was UNPLANNED, (and we can't possibly keep them all), who wants an adorable black lab-mix puppy???
Posted by TnT at 4:04 PM

I bet those are going to be some awesome hunting dogs! Just hold onto a couple for the next few weeks so I can play with them.

Put one in the mail for us!! They are so sweet and cuddly (must look like their daddy since Naya is so fair!). I love labs :)

I would take one in a heart beat, but don't have Ron convinced yet. They're SO cute!!

oh i wish i could take one or even two!! They are all so beautiful!

I was just going to ask if this was planned. I do wish I could get a puppy for Micah, he loves the kitty, but the kitty doesn't really love him.

Way to go, Naya! How's the octomom doing with her pups? So now you're a family of 13--love to all, Bob & Helen