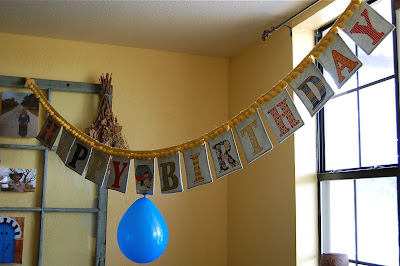 Yesterday, our newly-turned 4 year old woke up to a house full of balloons, streamers, presents, and a HAPPY BIRTHDAY banner handmade in his honor. It was a day like no other, where Mr. Riley Dean was treated like a king. I asked him a few days in advance to tell me what he wanted for his birthday breakfast and he quickly and positively requested Papa's sourdough waffles with blueberries and orange juice. Our morning was filled with fun as we watched Riley say over and over.."It's my birt-day today" 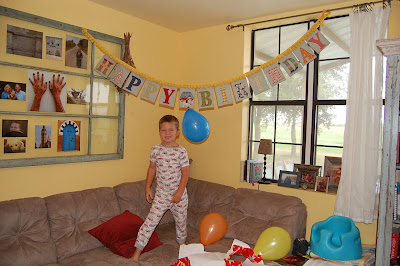 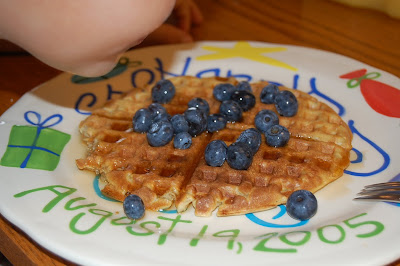 Riley has a "birthday" plate, given by Gigi, that he gets to eat off of all day for his birthday. 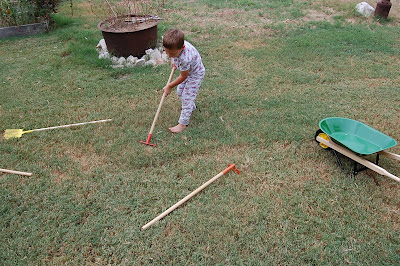 Now that he is 4, we've relinquished the yard duty to him. Hee hee. Grandma and Grandpa in Bakersfield outfitted Riley with his own wheelbarrow (John Deere, of course) and yard tools. Pajamas or no, he quickly went to work outside. 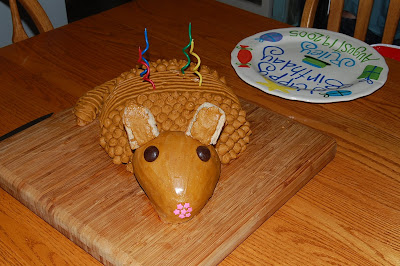 Last year his request was a train cake and this year he asked for an armadillo cake. Why in the world would a 4 year old request an armadillo for his cake? I can't say for sure, but if you remember one of my first posts since arriving to Texas was about "Jonny Rocket", our resident armadillo that we found several times quenching his thirst out at the pond. Riley found his quite cute and interesting. He used to tell stories about him a lot....what we thought he ate, where he slept, why he was at our pond, etc. We haven't seen Jonny Rocket in a long time. But a few months ago I asked Riley to begin to think about what he would want for his birthday cake this year. I thought for sure he'd request a green and yellow John Deere tractor. But no! He said he wanted an armadillo cake. 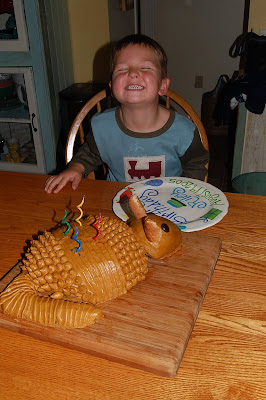 Now, as any mother would, I told him I'd be delighted to make him one and I quickly went to work online researching how in the world I'd make a cake look like an armadillo. After one quick google search, I discovered that the armadillo cake has become quite popular, made famous by the grooms cake in the movie Steel Magnolias. I had no idea! 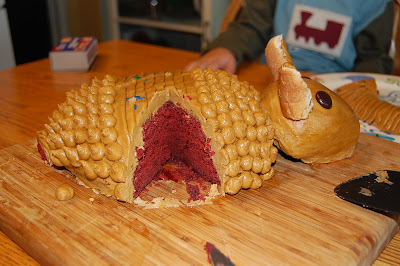 All true armadillo cakes are made out of a red velvet recipe, yielding a "bleeding armadillo" when cut into it. Riley, being 4, didn't quite get it...but the rest of us enjoyed the idea. I mean, not that we enjoyed the idea of eating a real armadillo...yuck...I could never imagine...but the idea that we were sticking true to tradition. Anyway...this was my best attempt at an armadillo...using what I had on hand at home.
+++++++++++
The rest of the day was spent at a bike shop picking out what would be Riley's first bike with pedals. He received a "balance bike" last year for his birthday and it's often difficult to peel his bottom off of the thing-- it has literally become an appendage. What can I say...that is life on a farm for a little boy. He has outgrown it though and with minor convincing, he saw fit that he was ready for a "real bike."
At the bike store we told the salesman right away..."not interested in training wheels, this kid needs a real man's bike." And a real man's bike he got! We left that store with a "trick" bike...a solid, good quality machine that is made for kids who are quite skilled and can do things like spin the handlebars, bounce on one tire, etc.
One the way home from the store, Abram got hungry and we pulled over in a big empty parking lot to nurse. Papa and Riley got out and thought they'd give the bike a practice on concrete since at home we only have dirt and gravel. Riley sat on the bike and Papa said, "One, Two Three...", ran with him for about 10 feet and let go. I was preparing myself to get ready for all kinds of skinned knees and elbows....but au contraire....Riley took off like a champ. He rode around that whole parking lot with absolutely no help at all. We couldn't believe it! (The only bad part was my camera was at home!)
So, I took a short amount of video footage this morning and it is posted here.
Moral of the story for all of you parents with little ones: buy a balance bike first and skip the training wheels forever!!
The remainder of the day was spent at the water park at Sea World where there were no lines and we went down every slide they had "because I'm four now, Mom, that's why" - Riley.
Posted by TnT at 4:31 PM

I can remember coming to meet you for the very first time when you were a teeny, tiny small baby. And now you are so big, and you are working with your own tools in the yard, and riding bikes, and fishing and everything!

Love, Kim, and Charlie and Calvin, too!

Happy B-Day! What more could a four year old boy wish for?!!! I'm impressed with your mad bike riding skills.

Happy 4th B-Day to Riley!! That cake beats all, it's so cool!

I LOVE the banner!! Did you make it?? Also, I'm very impressed by your armadillo cake! I never heard of a balance bike before.

I never looked closely at that birthday banner until today - I LOVE it, what a great idea! It can be used over and over again. I just may have to use your idea Tracy! :)