One thing we've really missed since coming to Texas is having a nice place to ride our cruisers.  They are parked in the barn, collecting dust (sigh!).  Every once in a while we ride around the hay field with Riley on his balance bike, but the hay field is meant for tractors, not beach cruisers...there are too many holes and bumps in the way.
For Valentine's Day Tom planned an awesome day away in Austin, which is about a 2 hour drive north.  The weather was a bit windy and overcast, but it didn't matter.  It was Valentine's Day and we were out enjoying the change in scenery.  In the middle of downtown Austin is a lake that looks much more like a river and has ten miles of wide trials around it.  We were there the day before the Austin marathon and saw many people out and about getting ready for the run.  It was so exhilarating to be near water again and people in running attire exercising their dogs and having fun with their mates.  Austin has many similar personality traits to Humboldt, so in many ways, it was like we were "home" again. 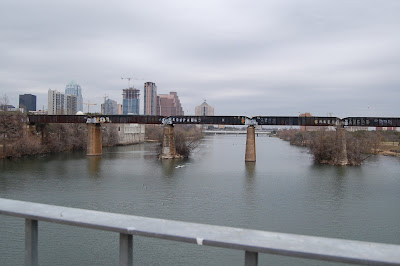 We rode to Whole Foods for a picnic lunch and enjoyed homemade chocolate covered strawberries on a blanket by the lake. 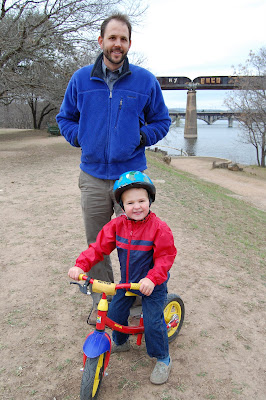 Our camera battery died right about here so I didn't get any pictures of us all on our bikes =(
Posted by TnT at 3:30 PM